Typhoon No. 19 (Hagibis) violently traversed the Tokai, Kanto, and Tohoku regions causing floods and landslides in several locations starting on October 12th, 2019 until dawn the following day. With the cooperation of our partner organizations, Peace Winds Japan (PWJ) and Civic Force (CF), we respond immediately to the disaster and provided emergency aid in the respected regions.

Typhoon No. 19 (Hagibis) violently traversed the Tokai, Kanto, and Tohoku regions causing floods and landslides in several locations on October 12th, 2019 until dawn the following day. With the cooperation of our partner organizations, Peace Winds Japan (PWJ) and Civic Force (CF), we were able to respond immediate to the disaster and provided emergency aid. The following are highlights of our activities.

On the morning of the 13th, two doctors (Dr. Asahi and Dr. Matsuoka) and one staff member of Saga University Hospital’s Advanced Critical Care Center were dispatched to Nagano Prefecture from Saga Airport on the A-PAD aircraft dedicated for dire situations like this. The joint emergency assistance team (CF/PWJ/A-PAD Japan) and the dispatched team met at Toyama Airport to enter a medical institution which had a power and water outage due to destruction of the embankment of Chikuma River.

Medical Examination at the Evacuation Center

On the 13th, the doctors visited two evacuation centers in Nagano City to examine and proscribe medication to those in need.

Procurement and Delivery of Emergency Supplies

On the 14th, research and assessments of the evacuees’ needs around Chikuma River began, whilst the procurement and distribution of sanitary goods and other items went on. The team also delivered the about 5,600 pairs of underwear and winter clothing and pressure washers provided by the emergency disaster response alliance “SEMA.” A couple days later on the 16th, the team delivered 850 water bags to Soma City, Fukushima Prefecture and Marumori Town, Miyagi Prefecture, where water outages continued.

Moving Patients from the Flooded Hospital

From the 13th to 15th, with the cooperation of DMAT and the Self Defense Force, 276 patients of the flooded Nagano Prefectural General Rehabilitation Center and Nursery Clinic (Nagano City) were evacuated into other medical institutions. In addition, power generators and lanterns were provided to rehabilitation centers where power outages had occurred.

Report to the Governor of Saga

After returning from the medical assistance in Nagano City, the two doctors from Saga University reported the current situation to Governor Yamaguchi of Saga Prefecture; reporting’s such of facts as there being “situations where the severity that could only be noticed when on the site like the smell of sewage and the cold weather.”

Voice – There were many insights voiced from the disaster site

“The movement of the patients to a nearby hospital was successful thanks to the team, who even cleaned the hospital. We really appreciate the help, thank you.” Nurse of Nursery Club Clinic, Nagano City

“Because there was a power outage, the lanterns helped a ton when moving patients through the dark and flooded rehabilitation centers and hospitals.” Doctor who helped transport patients

“My house had been buried in mud. Paper work for proving the destruction has been completed, but the house has yet to be cleaned. I will give the socks to my neighbors who have suffered similarly.” Woman who visited the Chikuma City Hall

“Thank you for providing the pressure washer. We would like to recover as soon as possible; and for others visit the recovered city of Obuse as a tourist in the foreseen future.” Staff of Obuse Town Disaster Volunteer Center

Thank You from A-PAD Japan

In response to A-PAD Japan’s emergency support activities for Typhoon No. 19 (Hagibis), 180 people have donated ¥ 4.79 million (JPY) through hometown tax payments of Saga Prefecture (as of October 28). We greatly appreciate everyone who have supported us, thank you.

We plan to continue to support into the future for the mid- to long-term recovery of areas such as Nagano, Fukushima, Miyagi, and Chiba Prefectures. We ask for your continued support. 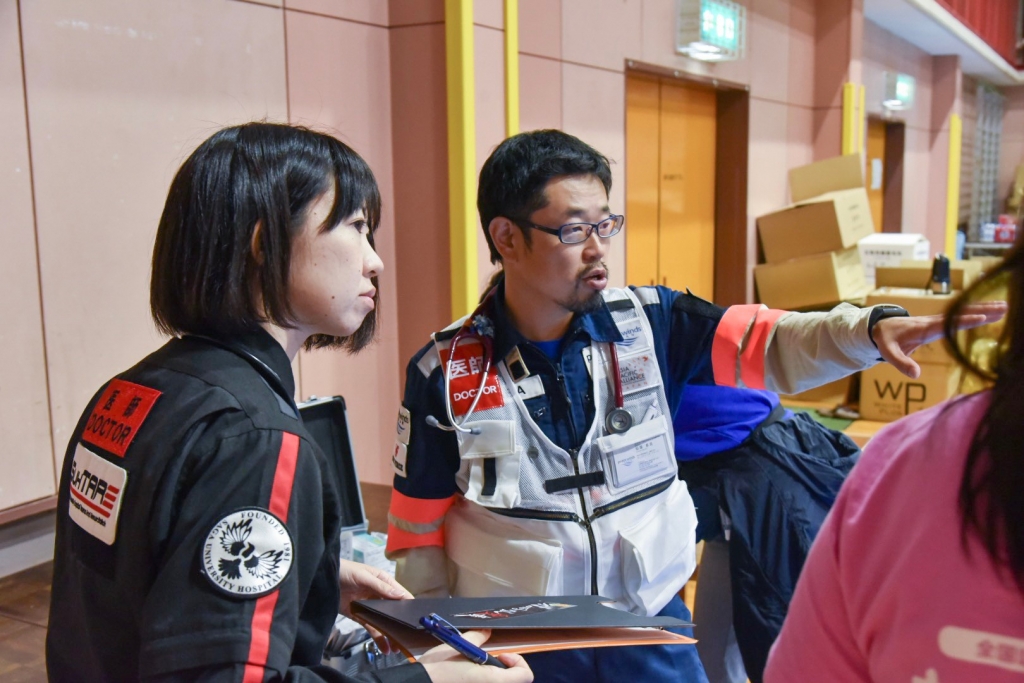